The emergence of multiple variants of the SARS-CoV-2 virus that causes COVID-19 has been making headlines recently. Viruses mutate through alteration in the nucleotide sequence of the genome, and these mutations can impact virus characteristics such as transmissibility, virulence, and antigenicity.

The Centers for Disease Control (CDC) has documented multiple COVID-19 virus variants globally and in the United States. In this blog, we’ll take a deeper look at the variants that are circulating around the world.

First identified in the United Kingdom (UK) in the fall of 2020, this variant is a mutation in the receptor binding domain of the spike protein. The UK variant can increase transmissibility of COVID-19 and may be associated with increased mortality compared with other variants.

To date, there is no evidence to suggest that this variant has any impact on the severity of disease or vaccine efficacy. The variant was first detected in the U.S. at the end of December 2020.

This variant emerged independently in South Africa and was originally detected in early October 2020. The South African variant shares some mutations with B.1.1.7 and has multiple mutations in the spike protein.

There is no evidence to suggest that this variant has any impact on disease severity. However, one of the spike protein mutations, E484K, may affect neutralization by some polyclonal and monoclonal antibodies.

The Brazil variant was first identified in travelers from Brazil who were tested during routine screening at an airport in Japan in early January 2021. The Brazil variant features three mutations in the spike protein receptor binding domain.

Mutations in the P.1 variant may affect the ability of antibodies generated through previous natural infection or vaccination to neutralize the virus. The variant was first detected in the U.S. at the end of January 2021.

Viruses mutate over time and are consequential because they can:

The CDC is tracking cases of COVID-19 caused by virus variants, as shown in the chart below: 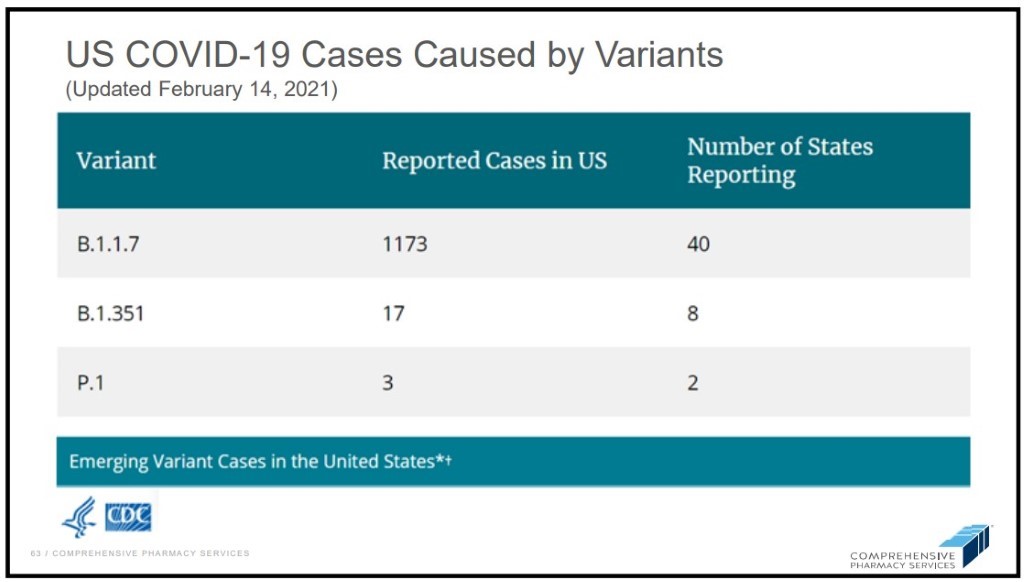 The CDC expects more variants to develop, and while the known variants will not necessarily make infections more deadly, they may increase transmissibility of COVID‑19.

Vaccinating enough people quickly to reduce transmission is the best strategy to fight the growth and impact of virus variants.