340B Windows of Opportunity

How 340B Supports the School of Hard Knocks

340B Coordinators who are implementing contract pharmacy services for the first time often ask us about how long they should allow a prescription to be filled, and considered eligible, after it is written.  The quick answer is “It Depends”, but before the Curmudgeons complain about the ambiguous ‘It Depends’, understand that it really does ‘Depend’ on a number of factors.

But before we get into how to determine and set your duration to a first fill for contract pharmacy prescriptions, let me assure our Curmudgeons (and they know who they are) that I will, via  a personal experience, relate how 340B provides student financial support for the “School of Hard Knocks:”.

Who decides How Long a ‘Script Lives?

Callers asking about how long a 340B prescription is eligible tend to assume (based on comments) that HRSA sets a twelve-month limit on a prescription’s eligibility.  In fact (citation – Apexus Answers) HRSA does not specify how long a prescription is valid and relies on each covered entity to specify their own duration for eligibility. This duration is regulated by the state boards of pharmacy.  Your 340B policy and procedure should specify your own duration, and most of the P&Ps we review designate twelve months, as per their local pharmacy board regulations.   The issue here is not so much how long a 340B prescription is eligible, but how long your system should allow between the prescription written date and the first fill date.

Is that Twelve-Months for an initial Fill?

Here is where confusion arises for many first-time contract pharmacy implementers:  They understand there is a twelve-month window for eligibility, and as such they have their third-party administrator set the “Window” to the full twelve months. This is OK for refills but can be problematic for first fills. See the Visio chart for the process flow. Note that in these examples, we assume the payor is eligible. 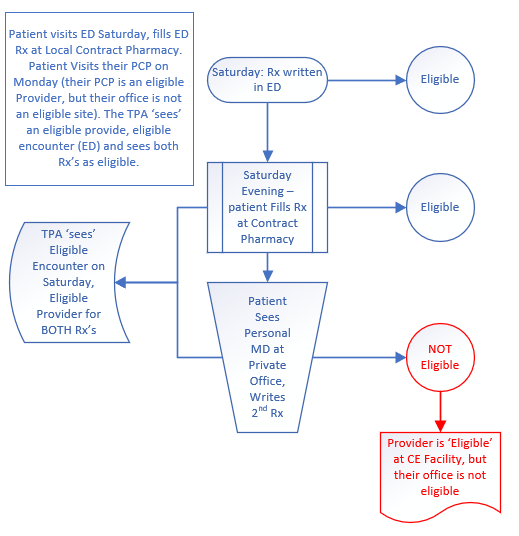 As the months pass, it gets more interesting.  Three months later, the same patient now visits their OB/GYN. The OB/GYN doc is an eligible provider at your facility, but her private office is not an eligible location.  She writes a birth control prescription for the patient.

The fix is easy if your TPA filters out prescriptions that come from ineligible locations.  eScripts usually provide this data element, and many TPA’s can tell if the prescription came from an eligible location or not.  If this is your situation, validate that the location is in fact being used as a filter (by auditing) and the issue is resolved, and you never would have even known this was a potential problem.

Unfortunately, not all TPAs or covered entities are able to use location filters.  If this is your situation, consider reducing the ‘window’ for the first fill down to a time period that ends before a patient is likely to see their own provider outside of your eligible locations.  Try these steps:

This can get confusing.  Perhaps a personal experience will illustrate better, and here is where I will show how 340B supports the School of Hard Knocks, from which I have a Master of None (MNA) degree.

Several years back I worked with a large system, and part of my responsibilities included 340B for the system. I had done the initial implementation and then the management of the program, and felt we were compliant.  During the first day we audited mixed use transactions.  All were eligible, and I was feeling great.  Then on day two we began auditing contract pharmacy transactions. Things went from great to terrible starting with the second transaction.

The second transaction was for an ED patient.  We pulled up their chart and found that the patient had an ED encounter for a broken finger.  The ED doc wrote a prescription for Tylenol #3, quantity 20, and all eligibility requirements were met.  All good news.  It’s too bad the prescription we were auditing was not this prescription, but the Norco the patient’s PCP wrote for them at that PCP’s private office in the adjacent Medical Office Building (MOB).  There was no medical record owned by the CE that showed this encounter, and with an ineligible location, the prescription was ineligible.  We now had one count of diversion.

Then transaction four was for a patient whose encounter was in Imaging.  The prescription was for triamcinolone and written by a dermatologist (not the provider ordering the imaging) who was an eligible provider.  However, he wrote the prescription at his ineligible office, again in the adjacent MOB. We did not own the medical record documenting the prescription, and it was ineligible. At the end of the audit there was a 60+ percent ineligibility rate for contract pharmacy transactions.  Most of the ineligible prescriptions came from lab or radiology encounters, although a few came from Speech Therapy.  In all cases, had we set the ‘window’ for the first fill down to 72 hours, none of the ineligible prescriptions would have been filled, and would not have shown on the audit.

After seven years I still have nightmares about that conference room, and how far I sank down into my chair as day wore on and the ineligibility count grew.  The auditor commented at one point that my distress was obvious, but the outcome remained the same.  Diversion.

So, my Curmudgeon buddies, 340B paid more than a year’s tuition to my School of Hard Knocks.  Please don’t point out that a properly managed internal auditing program would have detected the issue.  This is the reason I push internal auditing so hard. Hard knock lessons tend to hover at the top of your thoughts.

Look at your ‘first fill window’.  Be sure, via internal auditing, that your program, which likely took a large portion of your time to implement, is working the way you designed it to work.

Thanks for reading our Blog.  I hope it meets expectations, and as always, if you have a 340B question, reach out to your friendly neighborhood CPS 340B team for assistance, at 340B.Help@cpspharm.com .