340B Patient Eligibility and Aesop's Fable 35

Just the rumor we planned a 340B blog that would relate to another Aesop fable has the Curmudgeons at Large (and they know who they are) emailing us with righteous complaints about ‘click tricks’ (tricks to have more people ‘click’ on your blog).

But it’s a fair comparison.  Fable 35 (as numbered by the Perry Guide) is The Satyr and the Traveler.  In it, a forest Satyr pities a cold Traveler and invites him to his cabin for porridge.  In the story, the Traveler first blows on his hands to warm them, then blows on the porridge to cool it, which resulted in the morale to: ‘not trust someone who blows hot and cold with the same breath’.  However, you might say the morale is ‘too much information can be confusing’. Which is certainly the case with 340B Patient Eligibility.

Patient Eligibility is extremely complex. It involves not just the patient, but the Covered Entitiy's (CE) policies and procedures, medical staff bylaws, OPA Database entries, Admissions, Discharge and Transfer (ADT) software, the CE's charge system and policies, payers, and how staff use automated cabinetry.  This complexity results in the number one answer when anyone asks us about patient eligibility, and that answer is 'It depends'.

OK: I'm hearing screams of 'too much information'!  HRSA literally apologized in advance for the definition in the CFR document.  Let's break it down.

No CE or child site is 340B eligible without being listed on the OPA database.  Just being on the database means that HRSA validated that the CE, or its child sites, all met the basic requirements for 340B eligibility. For CE's without eternal clinics or contract pharmacies, this is very simple, and requires a single entry.  Start adding off-site clinics, child hospitals with off-site clinics, and contract pharmacies, and it starts to get complicated fast. 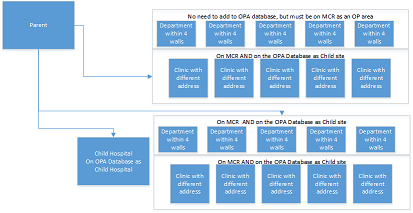 Now add a child hospital - one under the overarching umbrella of the parent facility.  The Child Hospital must be on the OPA database as a child site, and ALL clinics, inside the four walls as well as outside the four walls, must be listed on the OPA database.  Consider this point carefully: any department at a child hospital that intends to use 340B, either as a mixed use area, or had the potential for a discharge prescription following services there, must be submitted to HRSA and show up on the OPA database as a child site before 340B drugs can be used or dispensed there.

I get a lot of questions about the healthcare provider.  The definition above (#2) is almost clear: a health care professional who is either employed by the CE, or provides health care under contractual or other arrangements.  Unfortunately, it's easy to get wrapped up in local definitions of Active, Attending, Inactive, Temporary, and other definitions of a health care provider.  The most simplistic form of this rule is that the provider, whether he/she is a physician, mid-level practitioner, or other health care professional, has an agreement with the CE to provide services on their behalf.  As noted, for Hospitals, this can be through employment or a contract.    It might be different for FQHC's or grantees, but let's let that go for now.  Consider the case of ED physicians.  Often there is a contract between the hospital and a firm that provides Emergency Room Physicians.  The actual arrangement varies by hospital, but so long as there is an agreement as mentioned above, these providers are eligible.

The definition gets a little more cloudy when a Consulting Physician is called in to see a patient, or if a patient is referred to a specialist who is not on your medical staff.  The prescription remains eligible so long as there is a note in the medical record documenting the request for the consult or the referral.  This holds true if there is a contract pharmacy prescription for a patient who is referred to a specialist outside of the CE medical staff.  However, the documentation on these encounters is often spotty, and most TPA software cannot adequately handle these situations, so we recommend letting these prescriptions go.

And the Infusion Center?

Infusion center questions are usually related to the Provider.  In a lot of situations, a provider outside of the CE's medical staff refers a patient to an infusion center.  This is specifically covered in 61 Fed. Reg. 55156 (October 24, 1996).  It is important that Infusion Center documentation clearly shows that care was provided by a health care provider, and that the patient did not simply have a drug dispensed for subsequent home/self administration.  We recommend documentation of pre-administration of the drug, such as documenting blood pressure, pulse, temperature, etc.  Then document care given during the administration, such as 'observed patient during administration, no adverse effects noted. . ' and finally, documentation of post-administration care, 'Removed IV catheter, vitals signs normal, patient discharged after observation.'

If you say the words 'Policy and Procedure' one more time. . .

One of our other 340B consultants and I worked with a director of pharmacy in a state not to be named.  Their P&P was not in good shape, and I referred to it one time too many.  I was told, and I can't say they were kidding, that if I mentioned P&P one more time. . . I won't repeat the actual threat, but it was colorful and quite descriptive.  A tremendous amount rests on your policy and procedure.  If you don't have the most recent Comprehensive Pharmacy services template, email us and we'll get a copy to you.

It's important to clarify in your P&P all of the items mentioned above. Areas for special attention include:

And this is important now because?

Following the last spat of Child Site entries we received a number of questions related to this topic.  Also, a lot of CE's are looking at their latest MCR's this summer and considering potential additions or deletions to the OPA database.  It's a great time to do a crosswalk between your OPA database information and your Medicare Cost Report.  Do all of your OPA child sites have corresponding entries in your MCR?  If not, they must be removed as soon as possible, and if ineligible 340B use exceeds your P&P Material breach threshold, reported.  At least one CE calling us had a previously eligible clinic drop off the MCR.  Fortunately, the Director of Pharmacy used our suggested constant readiness calendar, and caught this in less than a month of the change.  They were able to simply reverse the 340B purchases.

This is also important now as you look forward to updates to your OPA database in October.  Start now in collecting your data and documentation to file your submissions.

The last area we'll discuss is not the least important!  Your split billing software drifves your 340B coimpliance, and it's critical to have it properly maintained.  Check your locations to be sure tyou filter our all ineligible locations.  Story time: A new Director was reviewing their Split Billing Software and noticed a lot of ineligible locations were not filtered out.  That Director fixed the problem literally the same day, but the inappropriate locations had been passing through for quite some time.  No one could explain the error.  The approved list of eligible sites was signed off by both the TPA and the CE.  This emphasizes the important of a routine review of all the parameters in your split billing software.  We suggest not less than quarterly.

We work diligently to limit these blogs to under 1,500 words.  Sometimes that's hard to do, especially a topic as complex as Patient Eligibility.  This time we topped out at just under 2,000.  Which brings me back to the intial comparison of 340B to Aesop's Fable Number 35.  Patient eligibility's complexity creates challenges due to the multiple areas it involves.  It is not an area where answers are always quick and off the cuff, but often requires deliberate consideration.

If you'd like more information on this, or any aspect of 340B, please email or call us at any time.  Links are below.