340B, Manufacturer Audits, and The Fourth Tower of Inverness

The answer to these questions will come after we discuss 340B and Manufacturer Audits.  And now to business!

PhRMA companies, like any publicly held company, strive to increase shareholder wealth.  Part of any prudent company’s strategy must include maximizing revenue, profits, and collecting all revenues due to them.  And PhRMA is well known for maximizing revenue and profits.  340B is an area they focus on, for reasons illustrated below.

As far back as 2005 the Office of the Inspector General published a report (click here for more) that illustrated problems in the 340B program with not only diversion, but duplicate discounts. This contention’s been reinforced with other OIG studies and surveys, one in particular about contract pharmacies (click here for more).

For this reason, many, if not all PhRMA companies implemented internal programs focused on detection and resolution of potential duplicate discounts or diversion.  The manufacturer may have a variety of methods to detect diversion or duplicate discounts.  These could include;

1. An Unusual volume of 340B to GPO/WAC compared to similar facilities

2. A posted HRSA Audit finding of duplicate discount or diversion

3. Unusual purchasing patterns, such as sudden spikes in one account (340B/WAC/GPO) over another.

If there is a concern by the manufacturer that there is an issue at a Covered Entity (CE), there is often an informal communication to alert the CE of a potential error in their 340B program.  Most often, this issue can be worked out quickly between the Manufacturer and the CE.

So: you got a letter or email from a Manufacturer alerting you to a concern they have about a potential error in your 340B program.  What happens next?

Carefully review what the manufacturer is requesting.  I know of several CE’s who had errors in the multiplier on selected IV fluids, and Baxter contacted them with a concern they were overbuying on their 340B account.  When the CE’s checked, Baxter was right.  The CE’s I know of quickly fixed the issue, notified Baxter of what they had found and done, and paid the difference between their 340B discount and the appropriate price of the product (WAC or GPO).  This closed the issue. However, if there is a dispute, the process may escalate.  To manage this process, in 2016 HRSA issued guidance on Dispute resolution (more info here).

Some manufacturer requests are not easy to resolve, or the CE may not agree with the manufacturer’s request.  Now what?

As mentioned earlier, HRSA provided guidance on dispute resolution.  IF a manufacturer feels a CE is not working with them “In Good Faith” to resolve a dispute, they may request that HRSA approve a ‘Manufacturer’s Audit’.  To do this, they are required to prove there is a ‘Good Cause’ for an audit.  This rule limits the possibility of capricious auditing.

If HRSA finds there is sufficient cause to grant a Manufacturer audit, the audit is approved.  The process, in extreme detail, is provided on page 65410 of this document (click here).  In summary;

1. The Manufacturer and CE are notified of the audit (the CE can contact HRSA if you feel there is not cause to audit)

2. The manufacturer submits a work plan which should include:

b. Skill of Auditors to assess the data

c. Test/Procedures to be used on the data

From this point on, the process is similar to a HRSA Integrity Audit, only focused exclusively on that manufacturer’s drugs.  A final report is submitted, and if there are adverse findings, the CE will be required to submit a Corrective Action Plan (CAP).

Although there are no specific guidelines, historically HRSA limits the potential review period to no farther back than three years. 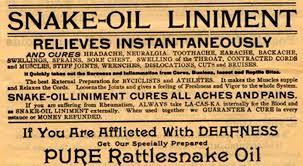 Some esteemed publications note that PhRMA comes from a snake oil heritage (click here for info).  True or not, some of the behavior we’ve seen from more than one PhRMA representative suggest a primer on ethics may be in order.  Here's one example of why:

In one particular incident we were involved in recently, a PhRMA representative used subtle threats, constantly changing requests, and deceit to induce the CE to move forward with their request.  Their request escalated from an initial review of a couple of their drugs over a three-year period, to all of their drugs over a six-year period, including not just claims of duplicate discounts for Medicaid Sales, but for Managed Medicaid(MCO) as well. The representative claimed to have data showing that not only did the CE take the 340B discount, but the State’s MCO took a rebate as well.

When the CE was able to discuss the possible MCO duplicate discount with their state, they learned the drug company representative lied: there was no MCO rebates taken during the time period under review.

Moral: be cautious believing all claims made by a PhRMA (or any external) representative regarding your 340B discounts.

A new question is coming up these days: Exactly who can contact you on behalf of the manufacturer?  HRSA has no rules on who might contact a CE regarding a dispute about 340B purchases.

Recently a lot of CE’s have received communications from a company claiming to be acting on behalf of a number of PhRMA companies.  The communication states the CE should cooperate with them as they would with the PhRMA company, and provide detailed information regarding 340B purchases specific to a list of drugs.

Our recommendation is that, before you share any information with any external agency, confirm that in fact they are truly authorized and approved to collect that information.  A few CE’s we’ve worked with requested confirmation via certified mail from the actual Drug Company. So far, not one of those requests have been met.  In each case, a PDF file with the drug company’s logo was emailed back as ‘validation’.

The best advice we know is to contact 340B Health’s legal team, and discuss this with your own organization’s legal counsel.  At a minimum, exert caution before sharing any information!

Industry tends to expand anywhere there is money flowing. TPA’s sprang up almost overnight when HRSA provided guidance expanding Contract Pharmacies from one to ‘unlimited’.  It looks like there may be a new sub-set industry growing to support PhRMA’s desire to minimize ineligible 340B purchases and duplicate discounts.  Given OIG’s reports of issues with states managing Medicaid Rebates appropriately, it’s easy to understand PhRMA’s concern.  But perhaps not their approach.

So: How does this relate to the Fourth Tower of Inverness?

But first: for the younger reader:  The Fourth Tower of Inverness is an audio series by the ZBS foundation, directed and written by Meatball Fulton.

In the seven-hour series, the protagonist Jack Flanders visits an old estate owned by his aunt.  As he approaches, he sees four towers, but everyone else only sees three.  Long story short, Jack endures a series of mystical escapades searching for the elusive fourth tower and trying to find the Lotus Jukebox, which plays haunting melodies just before a disaster strikes.

And this relates to 340B?  I urge you to listen to a few episodes of ‘The Fourth Tower’.  More information comes from rumors and misinformation than formal sources.  I have fond memories of the audio program.  When it first aired back in the 1970’s, I was a student at Clear Lake Medical Center.  We’d have just finished filling and checking med carts for delivery to the units, and would be taking a break.  We’d listen to Pacifica Radio who would play ‘The Armadillo Hour’ (Willy Nelson, etc.) then they played the Fourth Tower.  At least they did so until a guy I went to high school with (not a friend, an acquaintance) helped his brother bomb Pacifica’s antenna, which shut them down for over three months. But that’s a different story.

One last note:  be cautious in sharing any information about your 340B program with anyone who you do not know have a legitimate cause to know.